Home  »  About the Foundation  »  Our Inspiration

“The depth of a father’s love shows in his daughter’s eyes. What’s known is what’s shown from sunset to sunrise. A foundation built on more than just what is spoken. It’s commitments kept and promised that go unbroken. An emotion so immense that nothing in this world can erase. The permanent impression of love is tattooed upon her face. A relation so peculiar that only the two can understand, Yet so immaculate it’s obvious that it was planned.” ~~© Michelle W. Emerson 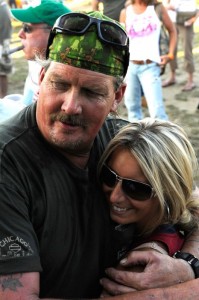 At 6’4, 280 pounds, many found him intimidating, but to me, he was my dad and an extraordinary man.  When people hear that he was a biker, their first impressions skew towards the negative, and they rush to judge without realizing the depth of his ability to love and the enormity of what they cannot see… his huge heart.

My dad, Mark Gajewski, was born on June 11, 1959 and most people just called him “SKI”.  He was the kind of man who turned heads when he entered a room.  He was a monolithic man who’s stature towered above all else and who’s heart was so big that they had to remove most of his lung to make room for it.  Almost always in jeans and a denim shirt with a welders cap on, he was hard to miss, especially when he wore his Care Bear hat that I bought him. Inside that man was a little kid that just wanted everyone to smile.  He would lumber into a room and shout “Hello Cupcake” and everyone would crack up laughing.

My dad grew up outside of Detroit, Michigan with his adopted family where he attended L’Anse Creuse High School North.  He developed testicular cancer in his younger years and was told he had 6 months to one year to live.  After his surgery, he made sure to enjoy life and racked up $47K in debt in the process.  The doctors were wrong and he lived for the next 25 years paying down his debt!  He joined the United States Marine Corps right after graduation.  It was there where he met the love of his life, my mom, Debbie.  They were married for 32 years and raised two children together, myself and my brother Sean.  They stayed together in good times and in bad.  He was a great husband, father, friend, uncle, and brother.

My dad loved children.  He would seize any opportunity to make a stranger’s day by pulling a dollar from his pocket, dropping to his knee and telling a child: “Here, tell Mom and Dad you want some candy. Now you be good.” Then he’d get up, give a wink and a smile and walk away.  That’s just who he was.

He was always prepared for anything and he was ready to lend a hand to anyone in need.  He had more on his belt than most guys have in the saddle bag of their bike.  If there was a tool, Dad had it and would lend it to anyone who needed it.  He was someone that you could count on and he would give away his last nickel to help someone else.

So it’s really no surprise that on the tragic day of 9/11/01, my dad was one of the first people to assess the situation and offer himself to any relief efforts that he could.  He did not arrive at the scene dressed as a police officer or a firefighter but instead, as a humble blue collar worker.  He was a former Marine who never forgot his allegiance to our country and felt it was his duty to assist his fellow Americans.  Not only did he take time off from his job with Operational Engineers Local 30, but he spent months away from those he loved most, his family.

Skills weren’t the only thing my father brought to Ground Zero.  Besides being one of the most talented engineers and welders that I have ever met, my dad also owned a 40 foot tractor trailer and brought it as well as all of his tools in anticipation of what would be needed.  He spent months sleeping in that truck and other places he could find to rest his head.

My dad taught my brother and me that being a U.S. citizen comes with responsibility and he lead by example.  Even with all that he had given of his personal time and property at Ground Zero, he felt that it was not enough and he wanted to do more.  As a proud member of the biker community, he had the power to rally people that could help make a difference.  He lost many close friends on 9/11 and honored their memory by organizing and participating in several cross country bike runs.  Funds raised as part of these events were donated to various children’s charities including Tuesday’s Children.  The rides not only gave those who participated a sense of purpose, but more importantly, they helped to ease, even if only temporarily, their plagued minds taunted by reoccurring images of despair and devastation resulting from volunteering and witnessing firsthand.

My dad’s benevolent efforts did not end with 9/11.  When hurricane Katrina struck, we went down to New Orleans to help deal with the aftermath.  Once again, he stocked his truck to full capacity and was off for one month away from his family but helping others.  As someone close to my father once told him, “It’s your calling to be an angel and helper to those who are in need of your help”.  He would drop everything to help where and who he could.

When I think about our nation’s history, there are certainly many great people whose roles have been documented in making this great country what it is today.  When I think of heroes, I can’t help but think about men and women in capes with super human powers that I have read about as a child.  As I’ve gotten older, I’ve realized that it isn’t an artifact or special memento that makes a person a hero, but their innate intent to help others.  My father may not have received a medal and he will not appear in any text books, but to me and those that know him best, he was one of the great unsung heroes.  He was also my best friend, role model, inspiration, provider, shoulder to lean on and the person I would call with just about anything.  Not many girls have the kind of relationship I had with my father and I’m so thankful for everything and every moment we spent together.

From this little girl to her father, I can honestly say without reservation that this foundation isn’t about gaining publicity or popularity because he would have never wanted to be held above the countless others that risked their lives.  However, I hope that his story and this foundation inspire others to look within themselves and find the time and the desire to help others too. My father was a firm believer in the saying, “There is no “I” in team”.  I can honestly say, with every fiber of my being, that I want to be just like my father and continue to build his legacy in his absence.  My father took his last breath after battling Stage 4 Lung Cancer from his efforts at 9/11 on December 17, 2011, but I know he is always looking down and watching over each and every one of us and I will do my part in keeping his legacy alive.